Indiewire asked me to list my top ten films of the year, and talk about what I'm looking forward to in 2014. To my delight, nine of the ten films are "true indies," four were directed by women (see photo above), and all of them are narrative features. (Sadly, I don't have much bandwidth to watch documentaries, though I'm eager to see so many of them.) Check out my complete list and resolutions here.
Posted by mynette at 6:53 PM No comments:

According to Indiewire, I'm one of the "100 Filmmakers to Follow on Twitter." Aw shucks. Thanks, Indiewire. Woot!

And while you're at it, check out my Facebook too. Lots of heated debates about film, race, and gender, with a bunch of snark on the side.

Gracias!
Posted by mynette at 11:25 PM No comments:

Sorry boys, but it's time to change the game!

Check out the Los Angeles Times piece about the company:
“New movie fund Gamechanger Films is formed to back women directors”

Here's to more diversity in film!

Posted by mynette at 1:39 AM No comments:

I recently did a very long 6-part interview with The Black List's Go Into the Story blog. Check it out if you can. Perhaps you will find something useful, or at least amusing, in it. If not, I am sorry.

Part 1: “I’ve probably known since 7th grade that I wanted to produce films. Growing up in New York and seeing movie sets in the street all the time, I was always fascinated by how that whole circus of crew, cast, lights, and trucks got assembled.”


Part 2: “Put yourself in other people’s shoes to figure out how to negotiate with them. Poverty breeds creativity. Try not to let them see you sweat. Feed your crew well. Don’t produce and AD at the same time. Guard the truck!”

Part 3: “I only take on projects that I’d be willing to lose sleep and nutrition for, and that I’d be proud to put my name on.”


Part 4: “So it behooves you to not put all your eggs in one basket, to make films back-to-back or even simultaneously. It’s an insane way to live. No indie film producers actually sleep.”


Part 5: “The next person who sends me an immigrant drama or microbudget Mumblecore comedy will get it chucked back in their face! (Unless, of course, it happens to be brilliant.)”


Part 6: “As a producer, I look for characters that great actors would want to play because the vast majority of indie films are still financed by way of cast attachments.”
Posted by mynette at 2:01 PM No comments:

"Cold Comes the Night" Premieres in the UK! 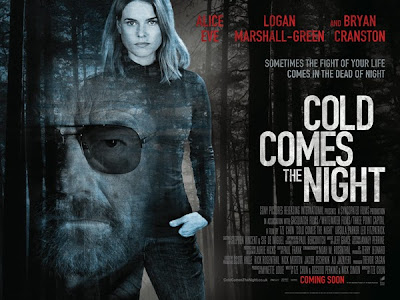 Check out the reviews, the trailer, and our Twitter and Facebook page. And if you live in the UK, buy tickets!

We'll also be doing some sneak previews at regional film festivals ahead of the film's US premiere--stay tuned for more info.

We're all very proud of this film, and would be grateful if you helped spread the word about it. Thanks!
Posted by mynette at 7:35 PM No comments:

Ha! Just found this interview I did last year with National Film Society at IFP's Filmmaker Conference, wherein I tell all filmmakers to quit.


By the way, registration for Independent Film Week 2013 is now open (if you haven't quit film already).

Posted by mynette at 1:45 PM No comments:


In honor of Asian Pacific American Heritage Month, I've put together a list of notable industry movers and shakers who traffic in the American narrative independent film world and also happen to be Asian. This list is not meant to ghettoize the people on it, but merely to call attention to their good work. They all belong on general "notable film people" lists too!

This list is totally off the top of my head, so it is far from comprehensive (apologies in advance to the many I've missed). Emphasis is on "American," "narrative," and "indie," so it's thin on international, documentary, and studio folks. I also haven't included many people from the Asian American film festival community because there are too many to name, but check out the list of festivals here. And I have not included crew, actors, or directors for that same reason, but I would like to point out one editor, one DP, and one director whom you should especially keep your eye on. ;)

All of these folks should be on your radar--Google them!

In the year and a half since Brian Newman wrote his very apt and memorable post, “Killing the Film Fest Panel,” panels haven’t improved much. In that time, I’ve spoken on or moderated over a dozen panels, and it seems that panel organizers haven’t really taken Brian’s suggestions to heart. The majority of film panels remain as excruciatingly boring and useless as ever.

So, let’s try a different tack: I propose that we panelists and moderators step up our game and give the (sometimes paying) audiences a better panel. Here’s how...

Make It a Triple Feature!

Marshall Lewy's CALIFORNIA SOLO, which premiered at Sundance and hit theaters at the end of last year, is finally out on Video-On-Demand and DVD!  Get it now on cable VOD, Amazon, iTunes, Netflix, Google Play, Vudu + many more outlets!

And when you are done with that, surf on over to Olivia Silver's ARCADIA starring John Hawkes. It won the Crystal Bear at the 2012 Berlin Film Festival and is available on cable VOD till March 13 only, so hurry!

Finally, check out an oldie but goodie, Tze Chun's debut feature CHILDREN OF INVENTION on Google Play. We've just lowered the price on this Sundance film to $1.99 for a 48-hour rental, and we--the filmmakers--get the majority of the rental price!  You'll wanna watch it in advance of our new film COLD COMES THE NIGHT, which is gonna be great.

Enjoy the show(s) and thanks so much for watching!
Posted by mynette at 2:49 AM No comments:

I Spoke at the Spirit Awards and It Was Frightening

Here's my Piaget Producers Award speech from the Independent Spirit Awards.  Even though I was reading a teleprompter and the lovely Paula Patton introduced me so graciously, it was pretty nerve-wracking.  Thank goodness that's over!  And thanks again Film Independent and Piaget!


So, I won the Independent Spirit Awards' Piaget Producers Award yesterday (see photos here!).  I'm absolutely honored, incredulous, elated!  There is a slew of people I want to thank, and since this is a blog and not a stage at an awards show, here they all are (apologies if I have missed anyone!):

Film Independent - For having supported me for years, by accepting my projects into Fast Track (twice!), giving me an equipment grant from Hollywood Rentals, a free DCP from IndieDCP, and booze for the premiere party for "California Solo" (thanks Jameson!). And now, for giving me this award! I'd especially like to thank Josh Welsh for allowing me to bend his ear & making intros to industry folks over the years.

Piaget - For your generous support of independent film. Oh, and for the 25 Gs! It will allow me the time, resources, and freedom to focus on getting my new projects off the ground.  You are not just supporting me with this grant, you are also supporting my directors and all of the cast, crew and vendors I will eventually hire once these films get off the ground!

Sundance Institute - For accepting me as a 2009 Creative Producing Lab Fellow--that $5K personal grant + $5K project grant gave me the cushion I needed to keep producing just as I was ready to call it quits. Thanks Anne Lai, Michelle Satter, Ilyse McKimmie & Rebecca Green for always being there to bounce ideas off of (and for your moral support!).  And thanks for creating and continuing to foster a community of independent producers who can lean on each other.

Sundance Film Festival - For premiering Tze Chun's "Children of Invention" in 2009 and Marshall Lewy's "California Solo" in 2012, and for opening so many doors. (And for the parties!) Thanks Caroline Libresco, Trevor Groth, John Cooper & the whole lot of you!

Rotterdam Lab - For being the very first film program to accept me in 2008, when I had only produced 4 shorts and co-produced one feature.  It was a fantastic education in filmmaking around the world, and I met many producers whom I'm still friends with (like my fave, Anish Savjani, winner of the 2011 Piaget Producers Award). Thanks Jacobine van der Vloed and Marit Van Den Elshout!

IFP - For accepting 3 of my projects into the IFP Emerging Narrative & No Borders Project Market, and for nurturing a vibrant, collaborative and supportive film community in my native New York.

Tribeca Film Institute & Film Festival - For inviting me to participate in the All-Access Key Ingredients program and for premiering P. Benoit's "Stones in the Sun" in 2012.

Berlin Talent Campus - For accepting me to the 2010 Talent Campus, where I met so many amazing talents from around the world and furthered my knowledge of international filmmaking.

All The Other Festivals That Have Screened My Films - Too many to name, but here are some great ones: Woodstock, Hawaii International, Edinburgh, Sarasota, IFF Boston, Nashville, BAMcinemaFEST, Sidewalk, and Denver.

Hawaii Film Office - For allowing me the opportunity to author the 15-20% refundable film tax credit (and thereby learn about state tax credits and the legislative process inside out!). And thanks Donne Dawson for being an amazing boss & friend.

Time Magazine, SportsIllustrated.com & Jupiter Research - For giving me a solid background in business that has made me a more effective producer.

My Professors & Teachers - For teaching me just about everything I know, not least how to read and analyze creative texts. Thanks especially to Leo Ou-fan Lee (I'm still sorry I ditched writing a thesis on 6th generation Chinese film; I hope you've forgiven me!), Emma Teng, Andrew Jones, Judith Ryan, Henry Louis Gates Jr., Robert Coles, and William Handley.

NYU Tisch - For indirectly offering me a free education in film producing. Thanks to Wendy Pan (wherever you may be) for hiring me as a volunteer PA for 3 days on Godofredo Astudillo's "Brighter Days" after I answered a random ad in the MOFTB job list (because that's what 28-year olds who want to change careers & don't know anyone in the film industry do!).  On this graduate thesis film, I met Sen-I Yu, Wei-chen Chang, and Michelle Chai, and ended up producing their NYU thesis films. I also met Eric Lin (who has shot 2 of my films and whose own feature I'm producing) and Mark Duplass on this film. (And through Mark, I met his brother Jay, whose apartment I scouted with Andrew Bujalski for "Mutual Appreciation." The apartment wasn't right, but Buj and the Duplasses ended up reconnecting at SXSW 2005, and the rest is Mumblecore history.)

Cast, Crew, Vendors, Agents, Distributors, Publicists & Supporters of Every Film I've Ever Worked On - For Example

My Executive Producers - Rick Rosenthal & Nick Morton of Whitewater Films, Joan Huang & Jimmy Tsai of Cherry Sky Films, Dan Cogan of Impact Partners, Three Point Capital, Ron Simons of SimonSays, Joey Carey & Stefan Nowicki of Sundial Pictures, & so many more!  Thank you for your faith in me and my projects.

Finally, thank you to my parents, sisters, friends & especially my husband for all of your support and love.

It takes a village to raise a producer!
Posted by mynette at 1:56 PM 1 comment: